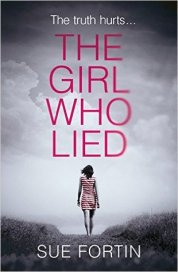 Erin has spent the last ten years hiding from her past, but a family accident draws her home to Ireland where she’s confronted by Roisin – an old friend who has discovered the truth. As Roisin threatens to reveal Erin’s secret tensions rise and, when Roisin goes missing, Erin and her family are immediately under suspicion and the long-kept secrets start to come pouring out.

Roisin’s character has no likeable aspects. She is, essentially, crazy (although with fairly good reason). Erin, on the other hand, is likeable and believable. There’s some real depth to her which makes the story more realistic. Once again there’s a horrible boyfriend, but luckily there’s also Kerry – a local who Erin starts to develop feelings for and who makes her feel like maybe her childhood town is not so bad after all. Kerry has his own difficult past and their relationship goes into turmoil as they struggle to understand each other.

The main themes of The Girl Who Lied are secrets and family, particularly the lengths that family will go to in order to protect one another. It is cleverly written, full of suspense with some good twists (which were a bit predictable but effective nonetheless). The only criticism I have is that the narrative voice changes abruptly sometimes. The majority is written from Erin’s perspective, but occasionally it jumps to third person in order to follow other characters. This was not particularly smooth and took some getting used to, but once I did I then stopped noticing it.