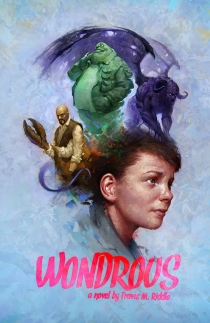 9-year-old Miles goes to sleep in his bed at home, and wakes up in a magical kingdom, torn apart by a bitter feud between the king and queen. Simultaneously learning to harness his newly discovered magical powers, trying to repair the rift in this world, and processing his own thoughts and feelings about the death of his grandmother and the break down of his parent’s marriage, Miles fights to find his way home.

I loved everything about this book. The combination of this magical world and Mile’s struggle to cope in the real world is really clever, and very well done. The two threads integrate perfectly, somehow without any confusion or interference with the adventure. To begin with, it felt a lot like a children’s story, but as it went on it dealt with some quite complex topics so I wouldn’t limit it purely to a young audience.

I particularly liked that none of the characters (except the veratt) were intrinsically evil. Although there did appear to be a good side and a bad side, Miles got along well enough with both and that was a really nice touch (and very clever as it reflected the split between his parents). The cover art was also very helpful as it made it easy to clearly picture what the different ‘species’ of characters looked like.

Basically, I really liked it.

I received an ARC of this book from the author in exchange for an honest review.