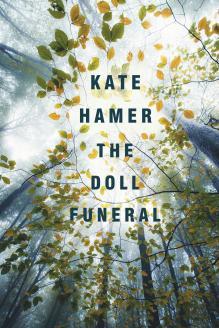 Ruby was adopted. She knows nothing about her real parents, but she wants to find them. Her adoptive family, Barbara and Mick, don’t care for her properly. Mick hurts her and Barbara doesn’t stop him. But Ruby isn’t completely alone, she has Shadow, who visits her from the other side… Along with others.

Kate Hamer’s story-telling is magnificent. There is no denying that. Her descriptions create clear visuals of the story, without going too far, while the story is meaningful and intriguing. The pace is steady and pretty relaxed. There’s no fast-paced action or epic romance. Really, this book deals with some very serious issues, with undeveloped elements of paranormal activity. These two clashing themes make it difficult to define this book in any one genre.

I liked the use of ghosts and spirits in this story, although there was a layer of darkness about them that could have been expanded on. There were some parts of the story that I didn’t really understand, like Tom and Elizabeth living alone when their parents left them. How did no one notice that or do anything about it? And everyone in town knowing that Mick beat Ruby – if they all knew, why didn’t anyone report it or try to intervene. I didn’t like the idea that no one was willing to help.

I really enjoyed reading The Doll Funeral, but to be honest, it wasn’t as good as it could have been. There were areas that could have been developed more, and I would have actually liked this story to be more sinister.