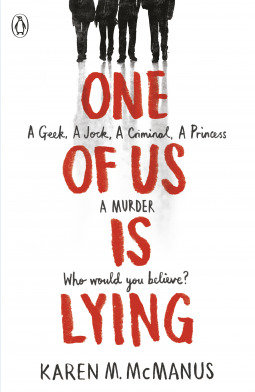 The Breakfast Club meets Gossip girl in this murder drama. Five very different students walk into detention, but only four walk out alive. Bronwyn, Nate, Addy and Cooper all find themselves under investigation for Simon Kelleher’s murder. All four have secrets that Simon was going to reveal to the whole school, so all four have reasons for wanting to shut him up. So did one of them do it, or are they being framed?

I enjoyed this book a ridiculous amount. It’s the perfect hybrid of a murder mystery/thriller and a YA high school drama – an unlikely combination, but one Karen McManus pulls of exceptionally well. The mystery aspect is very good: I knew who didn’t do it but I never guessed who did. The mystery and investigation fitted into the story very well, with no genre-clash at all.

The teen drama part was GREAT. I haven’t read a non-fantasy YA in ages and I forgot how much I love them. My favourite part was the relationship between Bronwyn and Nate. It was totally predictable but so sweet and I was really rooting for them. The other characters were great too: Addy and Cooper both developed well and turned out to have a lot more depth than they first appeared to. Even the side characters like Maeve and Janae were interesting and (somewhat) likeable.

One of Us is Lying is a clever murder mystery, as well as a well-written and enjoyable drama. I loved it – I read it in two days, only putting it down because I had to sleep. If you like teen drama and murder (in books, of course – not actual murder), look no further.