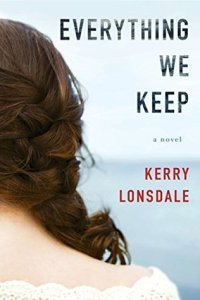 Aimee’s fiancé, James, goes missing in a boating accident in Mexico two months before their wedding. In a cruel twist of fate, Aimee finds herself attending James’ funeral on the same day that she should have been walking down the aisle. But when Aimee receives a message suggesting that James isn’t really dead, she begins to uncover a web of secrets that makes her question everything she thought she knew about her life with James. Is he alive? What happened to make him disappear, and why hasn’t he come back? Aimee tries her best to move on with her life, until she eventually heads to Mexico to find out the truth.

Everything We Keep is an interesting mix of mystery and romance. The story behind James’ disappearance is really intriguing and difficult to work out, while the blossoming romance between Aimee and photographer Ian is rather sweet. There were times when I couldn’t tell what direction the story was going in, but it recovered from these weak points successfully. I did find the characters quite bland. Aimee and Ian were both a bit wet and wimpy (although, given the circumstances, that was understandable) and the side characters were a load of nothing, just included to move the story along. The plot was very good though.

Overall, it’s pretty good but never quite gripped me fully.