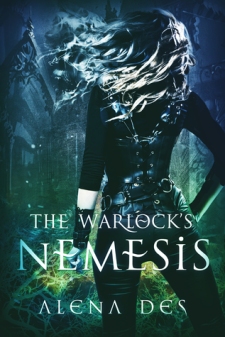 Alice is a healer, so when a deadly virus ravages the world, she is sent to help. Teamed with the powerful warlock, Tannon, Alice does what she can to save the human race. However, the power behind the virus has a different target in mind, and things take a serious turn for the worst for Alice, just when things seem to be looking up.

The Warlock’s Nemesis is book #2 in ‘The Kings’ series, but I read it as a standalone (having not read book #1). The events of the previous book are mentioned a few times, but it is absolutely not necessary to read book #1 first.

The most notable thing about this book is the number of plot twists. It is genuinely impossible to predict which way the story is going to go, making it surprising and exciting. Some of the events were a little farfetched and unnecessary, but this is a paranormal fantasy story after all.

Although I generally liked the characters and their relationships, I felt the relationship between Alice and Tannon was a bit forced. Alice kept going on about how much time they were spending together when – from the reader’s perspective – it had only been one or maybe two days. They were together for a maximum of a week and were suddenly utterly and completely in love. Also, once they were ‘together’, the way the spoke and behaved towards each other completely changed. It was quite jarring. I did like the way the relationship developed after that though, with the twists regarding Alice’s general temperament.

Overall, The Warlock’s Nemesis is a fun and eventful story, but it is a little flawed and the writing style lacked refinement.