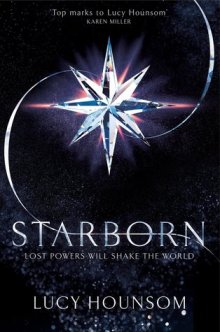 On the day she comes of age, Kyndra accidentally destroys an ancient tradition and gets the blame for an unnatural storm that targets hers town. Two strangers with powers fuelled by the sun and moon rescue her and take her to the hidden citadel of Naris. Once there, Kyndra experiences disturbing visions, brutal tests, and meets both fanatics and rebels all trying to use her for their own cause.

I really expected to love this book, but actually, it didn’t have a lot of the things I look for in a YA fantasy. Yes, this means it avoided most of the usual tropes and clichés, and managed not to be just the same as every other YA fantasy story, but it also made it kind of boring. Honestly, not that much actually happened, and it’s not a short book.

I wasn’t a big fan of Kyndra, and not liking the lead character is always problematic. She wasn’t too annoying or sassy, instead she was just kinda bland. She was obsessed with getting back to her family even though she knew that, realistically, she couldn’t return to her village (they did try to kill her, after all) and that was pretty much her only drive. Also, there wasn’t even a hint of romance to the story, which I do like at least a little bit of.

I did like Bregenne and Nediah. I could have happily read an adult fantasy book about them. Same world, some of the same characters, but an adult target market and less of the irritating and argumentative teenager.