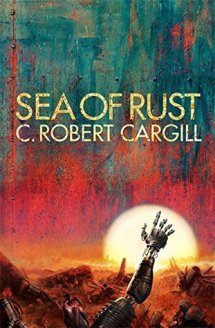 Thirty years since the humans lost the war against artificial intelligence, not a single human remains. But the robots do not live in peace. Two powerful supercomputers wage war against each other, absorbing free robots into enormous networks known as One World Intelligences (OWIs). Brittle is one such free-bot fighting to remain autonomous, picking apart robot carcasses in the sea of rust to find the parts she needs to survive.

Post-apocolyptic, robot stories are not uncommon, but Sea of Rust somehow manages to bring something fresh to the genre. The personalities of the robots are complex and engaging (my favourite: the Cheshire King), bringing humour and tenderness to an otherwise quite dark story.

The AIs did appear to be surprisingly unintelligent. In a world inhabited entirely by robots, it didn’t make that much sense that they didn’t manufacture new parts themselves, or that they didn’t all reach the same calculated conclusions on how to live peacefully. On the whole, they acted an awful lot like the humans they had wiped out.

Other than that, the story (in my opinion) was very well thought out and believable. Every element of the story of the destruction of humanity and the rise of the robots makes complete sense and is entirely (and rather scarily) plausible. It is only the robot’s failure to survive afterwards that didn’t make a whole lot of sense.

There is a lot of action and drama. Sea of Rust would make an excellent movie.