Hi guys! I’m very excited today because I have a very special guest post to share with you, from the briliant Relic author, Bronwyn Eley. In this post, Bronwyn will be talking about how her past has influenced what she writes. So, thank you so much Bronwyn and, without further ado, here’s her post!

How my past has influenced what I write, by Bronwyn Eley.

Like everyone, my past will always have an influence on what and why I write. My race, gender, socioeconomic status, schooling, religion and general life experiences all weave their way into my writing – whether consciously or subconsciously done.

Now that I’m reflecting a little bit, I can see how some of my past has subconsciously woven its way into my writing. In my novel Relic, I deal with many issues and one of those issues is surrounding abusive relationships. Not just abusive romantic relationships, but abuse in all relationships and in all its forms – physical, mental and emotional. The terror inflicting the abuse is, of course, Lord Rennard. He is, in a sense, a bully. Discontent, angry and afraid, Rennard takes his rage out on those closest to him, those who have been most loyal. Those he trusts.

This aspect of my novel wasn’t intentionally plotted; rather it came out naturally as something I clearly wanted to address. I have never experienced the physical abuse I address in my novel but it is something that has always resonated with me, as it does with most women. The fear of their partner turning cruel and physically (if not mentally and emotionally) abusing them. Not just the fear – but the questions: would I let it happen? Would I do nothing to stop it? Would I let him hurt me?

I have always been the type to boldly announce that I would never allow myself to be physically abused by a partner but I know it is a lot more complicated than it seems from the outside. In a very real sense, I am Kaylan in this regard: on the outside watching the horror and not understanding why someone would just ‘let’ themselves be abused; why they wouldn’t just walk away or fight back – only to realise that things are not at all that straightforward.

Then there are the things I consciously wove into my story.

Elias is an interesting and delicately constructed character. His alcoholism isn’t just in there for the sake of drama, it’s in there because I wanted a safe space to explore my feelings around it. I have known many alcoholics and heavy drinkers in my life and I have seen how it tears people apart, how it tears families apart and how it can take away more than you ever imagined.

Being Kaylan’s brother, Elias is an integral part of the story. I purposefully chose him to carry this burden because I needed Kaylan to learn lessons as my protagonist and she is going to learn a few of them through him. More to come on that in later books!

I also wanted to include something of my military life. My time in the Air Force was the best time of my life. It is the gift that keeps on giving. I emerged from my time there a hundred times more confident, more ambitious and more inclined to challenge myself. It was the hardest year of my life – yet the most rewarding. I have both good and bad memories. I laughed and I cried. I made lifelong friends – not just with the people in my course but with all military members. It’s like anything that is exclusive – a little ‘club’, if you will. Anytime I see someone in military uniform, I feel instantly nostalgic and connected with that person. I didn’t include much of my military life in the book but there is a line I put in there that Thorn says to Kaylan.

‘There’s a saying among the guards,’ Thorn mused. ‘One in, all in. If one person in the squadron makes a mistake, everyone suffers the consequences. It’s how they learn unity.’

This is a real saying we had in the military. One in, all in. And it was as Thorn said it – if one person made a mistake, the whole team suffered the consequences. At times it was a really hard concept to wrap my head around but it did teach us unity. In fact, it is one of my most treasured memories from that time. Even though a lot of difficult things happened as a result, we learnt valuable lessons and, in the end, it did bring us together.

Kaylan is a strong woman. Her interests and the way she deals with her emotions is very reflective on me. Novels always include aspects of the author and the main character often reflects traits that the author either has or wishes they had (at least, in my experience).

I’ve always said that I was born in the wrong era. That, despite all its hardships, the past calls to me. I say that if I got sent back in time, and I could do anything or be anywhere, I would want to be in Middle Ages/Medieval Europe or England, working as a blacksmith. So when it came time to choose a profession for Kaylan, it was easy! I chose the thing that I would want, something I could write passionately about. Something I would love to research and learn more of. I did a weekend blacksmith course and it was unbelievably fun. This time around, I created the experiences I needed to influence my writing and I can see a lot more of that happening in the future.

When you pick up Relic, I won’t be a stranger to you anymore. You will know a bit about me – what I like, dislike, believe, hope for, fear, desire. Writing is a vanity project with the added benefit of entertaining other people. As I said earlier, it’s a safe space for me to explore and have adventures and learn. My biggest hope is that readers will not only love the story but will come away thinking about the things I address in my novel and perhaps find something that they can relate to.

Bronwyn joined the military right out of high school, where she learnt (among other things) to disassemble and reassemble a rifle blindfolded. After that she spent a lot of her time travelling around the world. Her favourite places (so far) are Scotland, Mongolia, Iceland and Ireland.

Bronwyn finally found her natural habitat when she landed her first job in the publishing industry. While she has always been a writer, it was only when surrounding herself with books that she realised her life’s dream was to become an author. Relic is her first novel.

Bronwyn lives in Sydney and spends her time eating chocolate, reading and practising her martial arts. 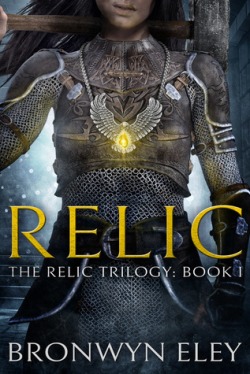 In the city of Edriast, there is no deadlier duty than to serve as the Shadow.

As the personal servant of the powerful Lord Rennard, the Shadow’s life is all but forfeit. Rennard possesses one of five rare and dangerous Relics – a jewel that protects his bloodline, but slowly poisons everyone else in its proximity. When the current Shadow succumbs to its magic, nineteen-year-old blacksmith Kaylan is summoned to take his place.

It’s an appointment that will kill her.

As the time Kaylan has left ebbs away, hope begins to fade… That is, until she discovers a plot to destroy all five bloodlines in possession of the Relics.

A rebel force plans to put an end to Rennard’s rule and Kaylan suddenly finds herself embroiled in a cause that might just be worth fighting for. But no cause is without its costs…

As her life hangs in the balance and rebellion bears down on Edriast, Kaylan must decide where her loyalties lie – and how she’ll leave her mark on the world.

Relic is the absorbing first novel in The Relic Trilogy, a thrillingly dark YA fantasy series.

One thought on “Guest Post: How my past has influenced what I write – Bronwyn Eley”